Garmin Fēnix 6 & 6S: Get 30% off these awesome running watch deals at Amazon | Fit&Well 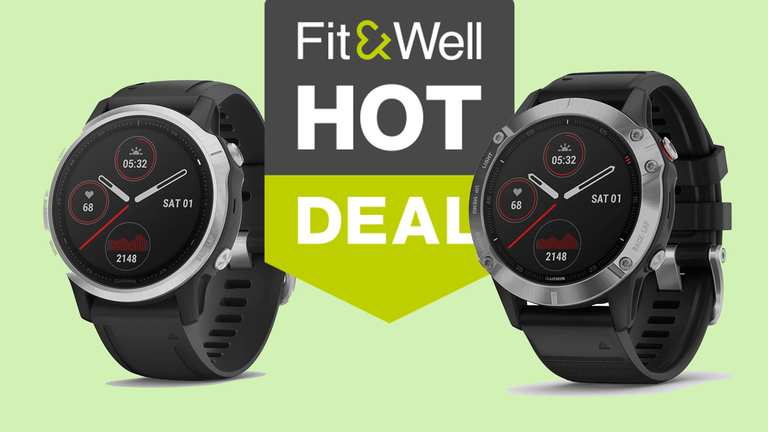 Have you taken up running as a way to get outside and stay active during lockdown? As gyms have been out of commission for the last few months, more and more of us have bought running shoes and taken to the streets in pursuit of a different kind of fitness. However, now it's been a few months, it's time to step up your game with a running watch.

The Garmin Fēnix 6 is one of the best around. A multisport watch equipped with its own GPS, it will accurately track your positioning and pace, feeding you vital information about your run, as well as a series of excellent health metrics and smartwatch functionalities.

Right now on Amazon, you can grab this incredible running watch for a frankly staggering 30% off, at just £369.00. The smaller Garmin Fēnix 6S, with a 42mm face rather than its larger sibling's 47mm, can also be picked up for the same price. Check out the deal in full below:

Garmin Fēnix 6 Multisport GPS Watch | was £529.99 | now £369.00 at Amazon
The Garmin Fēnix 6 is widely considered one of the best activity watches you can buy. Not only can you calculate your pace and distance, but the watch's advanced GPS technologies make it a great companion for serious hikers and trail enthusiasts. It provides everything from your oxygen intake to information on your sleep cycle. Don't miss out. View Deal

Garmin Fēnix 6S Multisport GPS Watch | was £529.99 | now £369.00 at Amazon
The smaller model, at a 42mm to the 6's 47mm, packs the same awesome functionality for a slightly more slender wrist. Acclimated to altitude, the watch is perfect for adventure, but it's got more than enough data and smartwatch functionality to be as useful in the big city as it is up a mountain.View Deal

Both watches come with options including silver, black and rose gold faces, with a choice of either black or white waterproof silicone straps.

Why buy the Garmin Fēnix 6?

The top-of-the-line Garmin Fēnix 6 Pro was rated the second best running watch you can buy (next to the Garmin Forerunner) but the Pro is just too much watch for any but the most serious runner. Most runners want a watch that supplies them with comprehensive health data, accurately records their runs, has smartwatch functionality and is equipped for any new challenges they may face.

The Fēnix 6 and 6S are more than equipped for the job. Their smartwatch functionalities include notifications sent straight to your watch and Garmin Pay, similar to Apple Pay and Google Wallet functionalities. But where the watch really shines is in its fitness features.

View advanced training metrics that include estimated running dynamics, heat- and altitude-adjusted VO2 max and a smart recovery advisor. The watch also comes preloaded with 14 fitness apps for sports including swimming, cycling and running. With advanced GPS capabilities, gyroscope and ClimbPro, an app that can help you plan ascents and descents, it's perfect if you wnat to take on new challenges in the great outdoors.