Omega-3 foods: what to eat to up your intake naturally | Fit&Well 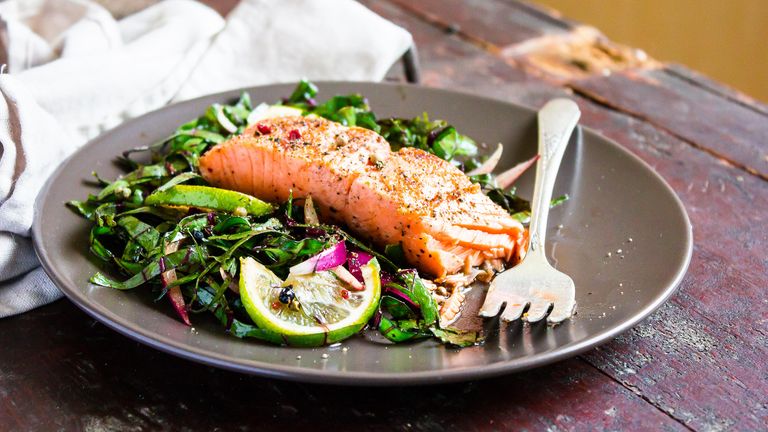 You’ve probably heard a lot about omega-3 foods. You may know they’re important to include in your diet. But do you know exactly how they help your health, which foods are high in omega-3 and how much you need to consume? We’ve got the lowdown.

What exactly is omega-3?

Omega-3 is a family of fatty acids that are essential to our health. There are three main types of Omega-3:

ALA is needed to make other omega-3 fats and can’t be made in the body, so you need to get it from your diet – mainly from vegetable oils, flaxseed, rapeseed, nuts including pecans and walnuts, and also green leafy veg.

Meanwhile, EPA and DHA have the key health benefits and can be made from ALA in your body. But that process happens slowly and only very small amounts are made from ALA. So it’s important to also eat foods high in EPA and DHA, which is where oily fish comes in. Fish, especially oily fish, has the highest levels of EPA and DHA.

How can omega-3 foods help my health?

The main proven benefits are for cardiovascular health. It’s been shown that people in countries with a diet high in oily fish – such as Japan and Greenland – have lower rates of heart disease than those in countries like the UK and US, where less is typically eaten. This is even when taking other factors, such as smoking rates, into account.

Omega-3 is also vital for a baby’s brain development, and for the maintenance of normal brain function throughout life. Furthermore, omega-3 fats are powerfully anti-inflammatory, playing an important role in reducing levels of inflammation in the body linked with conditions such as rheumatoid arthritis and lupus.

What are the best omega-3 foods?

Fact: you’re probably not eating enough foods high in omega-3 – few of us are, says dietitian Helen Bond. The best sources of omega-3 foods are:

Oily fish is a prime source of omega-3. ‘This contains EPA and DHA but on average, we eat less than half the recommended amount we need,’ Bond says. She adds: ‘Two portions of fish each week – one of which should be oily – should give you enough omega-3 fats.’

White fish does contain some omega-3 but at lower levels, so it’s important to include oily fish such as salmon, mackerel, sea bass or sardines. Tinned fish counts too, with the exception of tuna, where canning removes the oils.

Oysters, shrimps and fresh crab also contain the key types of omega-3 fat, along with other nutrients, such as potassium, zinc and protein.

Algae and seaweed are where oily fish get their omega-3s in the first place. If you don’t eat fish, these are the best way to get your EPA and DHA, as they’re the only plant sources of these substances. You can look out for crisped seaweed or the nori seaweed used to wrap sushi, or take an algae-based omega-3 supplement.

Walnuts, pecans, chia, hemp seeds and flax seeds all contain good amounts of ALA. Your body doesn’t use this as readily as EPA and DHA, but these are still great foods to include in your diet. They’re also rich in other nutrients, including protein and fibre. Try snacking on nuts, sprinkling seeds on salads or adding chia or flax seeds to porridge and smoothies.

A warning about omega-3 foods

Safety and sustainability are both issues when it comes to oily fish. As some species are over-fished, look for MSC-certified fish, which indicates stocks are better, advises the British Dietetic Association.

Unfortunately, oily fish contains toxins such as mercury from our polluted seas, and the larger oily fish – shark and marlin, for example – may have particularly high levels. Nobody should eat more than one portion of these a week, and pregnant women or those who may have a baby one day shouldn’t eat them at all.

Smaller fish such as sardines and salmon are considered safer. Everyone can have up to two portions a week.

Women past childbearing age, or who are not planning to have children, and men and boys can all eat up to four portions of oily fish weekly. But if you have concerns for safety or ethical reasons, algae-based omega-3 supplements can be a good choice.