Best exercises for weight loss: Tone up and take inches off your waistline | Fit&Well 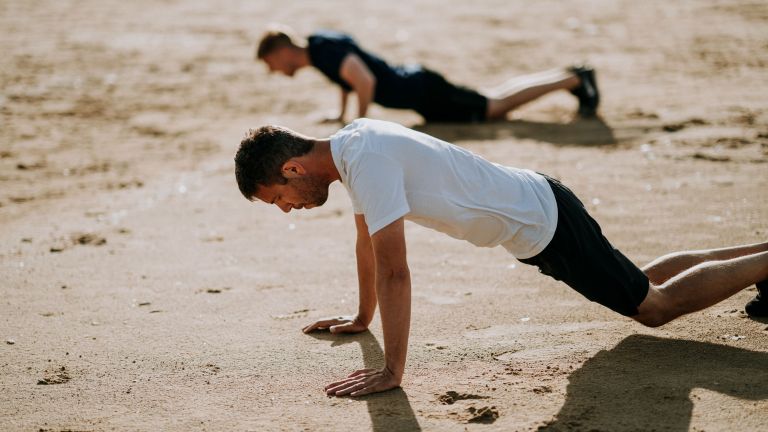 The best exercises for weight loss are often the ones you least expect. Kettlebell swings, for example, aren't the first exercises you'd think of trying: most people would usually lace up and go for a run instead.

However, while steady-state cardio is undoubtedly something you should be doing, it is not the most efficient way to burn calories, build muscle and lose weight.

If you seriously want to torch fat, you need to incorporate the best exercises for weight loss we list below – many involving strength training and intensive activity – into your next routine.

Increasing the heart rate is one way to encourage the body to turn to fat reserves as an energy source but numerous studies, including an in-depth look at High Intensity Interval Training (HIIT) by the USA’s Journal of Obesity, has proven that interval and strength training is far better for fat loss - burning calories long after your workout - than prolonged bouts of low-to-medium intensity exercise, like jogging or gentle cycling.

Of course, not everyone is at a stage where they are confident steaming into a hectic Spin class or group HIIT session, but swapping your daily jog for some kettlebell workouts, shadow boxing, skipping, burpees or traditional weights training will pay dividends over a much shorter timescale.

We’ve collated some of the best exercises for weight loss, studying numerous books and online articles to surface those scientifically-backed moves that can easily be incorporated into your next workout for maximum calorie burn and muscle toning.

And if you're really serious, you could take your home gym set-up to the max and consider investing in the best exercise machines to lose weight.

How to perform the best exercises for weight loss

Take a look at our suggestions below and study the form notes, as it is important to perform these moves correctly to prevent injury and to ensure you are incorporating the designated muscle groups, rather than allowing the body to compensate with a stronger area (thus making the move easier and negating the benefits).

Take your time, don’t rush the reps and ease yourself into any new exercise or workout routine. Start with, say 6-8 reps, and slowly build to more repetitions as the weeks progress. Similarly, if the move requires weights, start off light and gradually increase the load week-by-week.

Finally, a clean diet is going to play a starring role in any positive progress here, so looking to clean up and reduce the daily calorie intake should also be  top of the agenda. It is counter intuitive to burn fat with exercise, only to replace it with foods that are high in saturates, refined sugars and other nasties, so look towards clean protein sources, balanced complex carbohydrates and plenty of vegetables in your quest to get in shape.

The best exercises for weight loss

Not only will you strengthen large muscle groups, like the glutes, quads, abs and shoulders, this multi-faceted move will also get the heart rate spiking, therefore goading the body to burn fat as an energy source.

Place a kettlebell (start off light) between your feet, which should be set at around hip-width apart. Bend at the hips as if you were performing a squat and grab handle with both hands. Stand upright with core engaged, shoulders pinned back and down towards your butt with a nice, straight back.

Now rock back slightly to create enough momentum to swing the kettlebell up and out in front of you, arms straight and fully extended. Squeeze the glutes, thrust your hips forward and brace the core to assist in this movement and drive through the heels. Now allow momentum to swing the kettlebell back through your legs, remembering to bend at the hips before repeating the movement.

This is primarily a lower body exercise, so drive with the legs and glutes. The shoulders should only really be incorporated at the top of the move, where the kettlebell hangs in the air for a brief moment before returning to its start position. Aim to perform as many swings as you can in a 30-60 second time period and repeat this for 3-4 sets for maximum fat burn.

There’s a reason why you see boxers and MMA fighters throwing shapes with a skipping rope during training: it’s an absolute monster for elevating the heart rate, promoting cardiovascular endurance and building cat-like levels of coordination, as well as fast, agile feet.

It doesn’t matter your level of skipping ability, as any prolonged rope practice is great for burning fat and strengthening the upper body. Grab both ends of a rope and flick the wrist so the rope travels in front of your body and jump over to complete the motion.

As skills increase, attempt to speed up the skipping, try single and double foot jumps, swap feet throughout and even try some explosive “double-unders”, where the rope passes underneath you twice before the feet land. Look to skip for around 45 seconds at first and slowly increase this time as the weeks progress.

It is the killer bodyweight exercise that many fear in any workout but this compound movement involves almost every muscle group in the body and, as a result, sees the heart rate soaring. In fact, it spikes the metabolism at such a rate that the body will even burn calories after a burpee-laden session has come to a close.

From a standing position, drop down as if you were about to perform a press up. Explosively kick your legs backwards so your thighs are parallel with the floor and the chest, shoulders and arms arms are braced to take your bodyweight.

Don’t pause here, but instead draw your feet back under your chest before explosively leaping into the air, keeping your arms by your sides. Repeat this immediately, without pause, for as many times as you can muster in a 30-second period. Aim to increase the reps and session time as the weeks progress.

We are straying into old school Olympic lifting techniques here but if it ain’t broke, don’t fix it. In essence, this compound movement targets the big-hitting muscles in the upper body, while the quads and hips offer support from the lower body. This combination of large muscle groups gets the heart pumping, while strengthening and toning the upper body at the same time.

Grab a barbell (start off with just the bar to perfect form), stand feet hip-width apart and pull the barbell up while rotating it so it lays across your chest with your palms facing towards the ceiling. This is the starting position for the rest of the movement but you can negate the initial set-up by using a rack in a gym instead.

From here, bend the knees slightly, keeping a straight back, and drive through the heels, pressing the barbell directly overhead. As the barbel passes in front of your face, engage the shoulder muscles and press the bar upwards. The bar should end up just behind your head with arms fully extended. Pause here and return the bar to your chest in a slow, controlled manner and repeat the movement for 8-10 reps. Slowly increase load over the weeks as you gain confidence.

These single leg exercises force the glutes, quads and calves to work extra hard in order to haul your body up onto a raised platform. On top of this, the plethora of small stabilising muscles also have to kick into life to ensure you don’t topple from said platform. Adding a set of dumbbells to proceedings increases the load on the lower body, while improving upper body strength.

Find a solid platform, like a stable bench, plyo box or anything sturdy that’s around knee to hip-high. Place your right foot onto the platform and drive through the heel until both feet are together on the surface and you are standing upright. Step backwards with the left leg and repeat on that side, swapping legs throughout. Aim for as many reps (equal numbers on each side) in a 45 second period.

Grabbing a set of dumbbells and holding them around waist high while you perform the step-up is a great way of gradually adding load over time to ensure the body never gets too comfortable performing and exercise. That’s when progress plateaus.

Repeatedly slamming something heavy against the ground is about as primal as things get but this frustration-busting exercise also incorporates the upper and lower body, while sending the heart rates soaring. Ensure the medicine or slam ball you are using is fit for purpose (and not too heavy to begin with) to avoid embarrassingly spilling stuffing all over the place.

Stand feet hip-width apart, knees slightly bent and slam ball held above your head in both hands. Try not to lock out the arms but keep a slight bend in the elbows. Now brace your core muscles, squeeze your glutes and explosively pull the ball down in front of you, slamming it into the ground.

A medicine ball will bounce back up, allowing you to catch it and raise it back above your head, then driving through the heels and reaching up onto your tip toes to slam it back down. Slam balls are not designed to bounce, so require you to  adopt the correct deep squat form in order to lower the body enough to scoop the ball back up and return to a standing position. This variation will naturally work the legs muscles much harder.

Remember to keep good posture throughout this exercise, avoid letting the shoulders drift forwards and don’t allow the back to round at any point. You should aim to keep the core muscles braced so the abs assist with the hard work. Aim to perform as many slams as you can in 30-45 seconds.