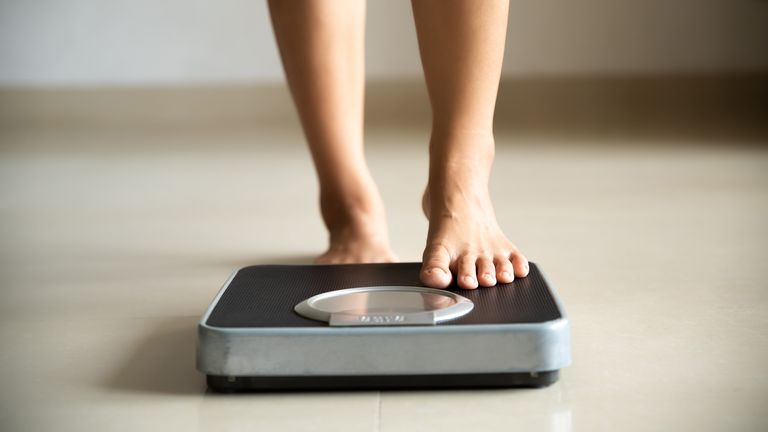 Let's get this out of the way early on: there is no quick way to lose a lot of weight safely and we certainly won't be recommending any unsafe ways.

Lasting change to your body composition requires patience, persistence and some simple changes to your lifestyle. Do your best to avoid processed foods, instead cooking and eating whole foods, be active regularly and stay consistent (getting yourself back on track after you're tempted to have a slice of an office colleague's birthday cake).

That said, there are strategies that can work for some people in the short- and very short-term to shed body fat healthily. But even elite athletes, fitness models and bodybuilders, some of whom will wake up at 3am to eat and weigh out every portion of food they eat, have to cycle off their super-strict approach from time to time to allow their body and mind to recover.

So if you're looking to fit into a wedding dress or want to look good on the beach, you'd ideally set yourself a target from several months out. The methods below should have an effect in a month or so if followed sensibly. If you're planning to give any of them a try, you should only do so if your diet is otherwise balanced and we recommend consulting your GP to ensure you're safe to do so.

To help you on your journey, you might want to monitor progress with one of the best fitness trackers, and grab one of the best bathroom scales so you can see the results for yourself.

What it is: Ditch the booze for a month and reap the many benefits, one of which will be weight-loss.

How does it work? There are two dietary benefits to spending 30 days without alcohol. Firstly, you're intaking fewer liquid calories – according to NHS.uk, a standard glass of wine is equivalent to three Jaffa Cakes and a pint racks up 240 calories, the same as a Mars Bar. Additionally, you'll avoid the, ahem, dubious food choices some of us make when we've had a few bevvies. Step away from the burger van…

Why do it? There's simply no downside (unless you're dependent on alcohol then you should definitely consult your GP instead). People who take part in Dry January report better sleep, clearer skin, as well as weight loss. A study in Health Psychology also showed that they really do change their relationship with alcohol, drinking less and less often even six months later.

How to do it: Just say no! Remove temptation from the house, yes even that bottle of Baileys left over from Christmas will start calling you two weeks in. Drink plenty of water and herbal teas early too, that will help purge your system.

What it is: Grab a notebook and a pen or download an app like MyFitnessPal and start keeping track of what you eat at every meal, listing the proportions of carbs, protein and fat.

How does it work? As any nutritionist or trainer will tell you, people filling out a food journal will do one of two things – they'll flat out fib that the half a chocolate fudge cake they had was just a sliver, but usually they'll be suddenly mindful of their food choices. They'll walk away from that doner kebab rather than have it uglying up their week's list.

Why do it? It's a quick, effective thing to do and doesn't involve calorie counting or restrictive diets. A study in the Journal of Personalized Medicine concluded that people using phone apps and fitness trackers experienced improved weight loss. You'll benefit from the psychological effect of watching what you eat and hopefully carry that mindfulness with you in the future.

How to do it: Simply note down your day's food or input the info into the app and review at the end of the week. For menu inspiration, head to our guide to how to eat healthily on a budget.

What it is: This doesn't, as the name might suggest, involve fashioning a bike out of pasta twist (although that does sound like all kinds of fun). What it means is eating fewer carbohydrates – think oats, rice, pasta, bread, potatoes and fruits – on days where you're going to be less active. To take it a step further, you can even cycle on your active days, timing the bulk of your carbs to follow a workout.

How does it work? As long as you keep your intake of protein and fats constant, your body won't panic and head into starvation mode so your metabolism will keep ticking along, burning fat as fuel.

Why do it? Carb-cycling can work for people who don't tolerate carbs well by using them around workouts when they can be properly used by the body. That in turn can lead to improved tolerance down the line. It's also been shown to benefit those with issues such as poor glucose control or elevated inflammation.

What are the downsides? It takes a bit of planning and some women's hormonal regulation systems can be sensitive to nutritional deficits, so as mentioned before, check with your GP before giving any nutritional strategy a go.

How to do it: Take an hour at the weekend to work out which days during the following week you're going to be exercising, cleaning the house or gardening. On days that you know you'll be less active, plan to eat mostly protein, vegetables and healthy fats while restricting yourself to a total of two to four cupped handfuls of carbs. On the busier days, look to eat 8-12 cupped handfuls of starchy carbs in total. You can alternate daily or do a couple of days at a time.

What it is: You've probably heard of the 5:2 Diet, popularised by Michael Mosley, or 16:8, both of which are models of intermittent fasting. The former sees you eat normally five days a week and then eat 500 calories (for women, 600 for men) on the other two days. The latter means keeping your daily eating to an eight-hour window between 10am and 6pm, with nothing during the other 16 hours. For a more in-depth look at both of these methods and more, head to out guide to how to lose weight by fasting.

How does it work? When you eat, your body releases insulin, which tells your liver, muscles and fat cells to store glucose. When you fast, however, less glucose in your blood slows down insulin production so the body burns those stores before moving on to stored fat.

Why do it? The 16:8 model is surprisingly easy to stick to and also stops you eating late at night, which can impact weight retention. One study showed that women on a 5:2 diet lost similar levels of weight loss as women on a calorie-controlled diet and another study suggested it can reduce the risk of heart disease and breast cancer. According to a 2017 study, intermittent fasting led to better weight and fat loss in obese men than restricting their calories.

How to do it: For the 16:8, you can adjust your window an hour either way, so either 9am to 5pm or 11am to 7pm, to suit your lifestyle and eat what you normally would within that timeframe. For the 5:2, eat sensibly for five days and fast on two others (usually Monday and Thursday). That's not to say you pile two days' worth of food into your fasting days, that's cheating!