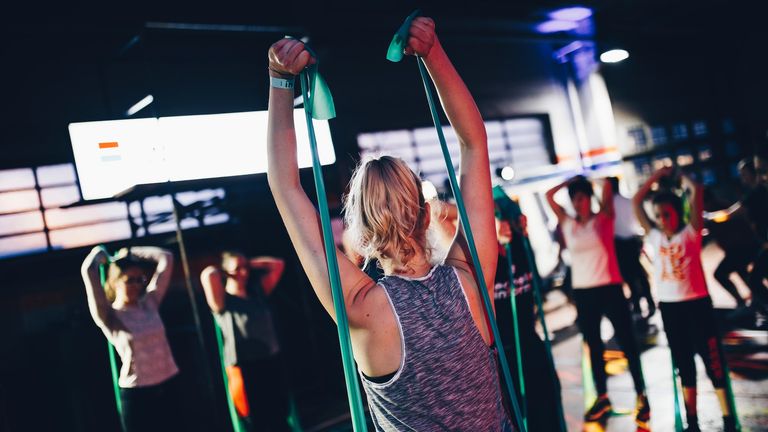 If you're looking for the best chest workouts with resistance bands then you're in the right spot. Resistance bands are the perfect piece of kit for those who don't have much room at home, or opportunity to go to the gym. Versatile, flexible, easy to store and transportable anywhere, there's no excuse not to get a chest workout in, whether you're in a hotel room or out in a park.

While commercial gyms – when open – are inundated with trick machinery that is designed to build a strong chest, a thorough workout can in fact be had just by using resistance bands. That's thanks to physics, and this guide to the best chest workouts with resistance bands.

The beauty of these humble strips of rubber – apart from the fact that you don’t need masses of floorspace to house a gargantuan chest press machine – is that they place the muscles under constant tension, meaning they are worked on the explosive pushing or pulling portion of the move, as well as when returning to the start position.

Resistance band users claim that the quality of each repetition is better than training with, say, just free weights or machinery, as they promote the small stabilising muscles to fire into action, which will pay dividends for anyone looking to improve their fitness over the long term.

But on top of this, resistance bands are relatively cheap lightweight and ultimately portable pieces of kit, making them great for those working out at home or those looking for an inexpensive way to workout in the local park or even when on the move.

What is a resistance band?

Essentially, these functional pieces of fitness kit are glorified rubber bands, but they are offered in all manner of shapes, sizes and gauges. Generally, they are colour-coded to represent different tension levels, with the skinnier bands offering the least tension and the thicker – often darker coloured – bands representing the heaviest tension.

The heavier you go in terms of gauge, the harder it will be to physically move that band, as it represents a much greater weight, so it is a good idea to invest in a range of bands to cover all bases (and exercises) and offer something more challenging when the moves become too easy.

Bands also come in different shapes, with the latex, flat bands often only really designed for light stretching. The heavy duty numbers are much better suited to exercise, while the specially designed rubber tubing is also typically offered with a variety of handle attachments, making them easier to grip and use.

The great thing about resistance bands is that they offer something to suit all levels of workout intensity, and they're also highly affordable.

Any chest workout worth its salt involves the press-up (or push-up), as this move, if performed correctly, is absolutely brilliant at activating the pecs, as well as targeting muscles in the arms, upper back and even the abs.

Introducing a resistance band works the chest harder, placing the muscles under constant tension throughout the move. Wrap the loop of the band around the palm of your left hand and pass it behind your back, under your arms, and grab the other end in the palm of your right hand.

Now enter a press-up position, with the band in between your palms and the floor, legs extended behind you, back flat, stomach and butt muscles squeezed tight. Now lower to the floor in a slow, controlled manner, keeping your elbows tucked in towards your sides.

Hold at the bottom of this move, with your forehead and chest hovering just off the ground and press back up explosively. The heavier the band, the more resistance you will feel at this portion of the move and the harder it will work the chest muscles.

Find a pole, bar or anything solid that you can wrap the band around and grab an end in each hand. Take a step forward and slowly let the resistance pull your arms out and to your sides, so your fists stop in line with your chest. From here, keep the back straight, engage your core and press the bands out in front of you using the chest muscles, so the hands almost touch when the arms are extended.

Don’t let your shoulder round or start to drift forward - your chest should be open wide with your shoulders pulled back and down towards your butt. The heavier the band is, the harder this move will be, so make sure you start off light and gradually increase the thickness of your band as your form improves.

Due to the amount of stretch that’s required for this move, you will need either a thin, lower gauge closed loop band or, preferably, tube resistance bands with a set of handles attached to each end. Run the band under the soles of your feet and stand straight with a solid base.

Grab each end of the resistance band and hold the handles (or band) at around waist-height. Keeping your shoulders pinned back and down towards your butt, raise your arms straight up (palms facing the ceiling) until your extended arms are hovering up at eye level.

Again, focus on contracting your chest muscles on the way up and slowly lower to the beginning of the move in a controlled fashion. The longer you take on the lowering (eccentric) portion, the more emphasis is placed on the muscles.

This move is typically performed on a cable machine in the gym, but you can achieve an effective chest workout with a resistance band. Loop the band securely around a bar or pole (a sturdy tree branch will also work) so you have one end or a single handle dangling.

Stand side on to the band with feet hip-width apart and grab the resistance band with one hand. Now take a few steps away to create some resistance. Your arm should be out to your side, palm around head height and facing down towards the ground. Using your corresponding pectoral muscle (don’t let your shoulders roll forward) pull the handle down towards the ground but keep the arm almost locked at the elbow.

The band should cross the midpoint of your body just in front of your groin, where maximum flex of the chest muscle will be felt. Hold this point for a second or two and then slowly return the band to its starting position, making sure you are controlled throughout. Repeat the same amount of reps on each arm.

Ensure you have a mat, or some kind of soft surface to lay on, as well as an anchoring point to wrap a resistance band around. A sturdy table leg or the bottom of a fence post works well, just as long as the object won’t move as you start adding tension to the band.

Lay on your back with knees bent and feet pressed firmly into the floor. Position yourself so you can reach behind you to grab the band. There should be a slight resistance here but ensure there is enough length to carry out the move without it becoming too difficult.

Grab the band with both hands and keep your arms locked before pulling the band over your head using your chest muscles (keeping the arms locked throughout) and holding for a few seconds at the top of the move, where the hands should be directly in you line of sight if looking up at the ceiling.

Control the lowering portion and return to the start position slowly, ensuring there is a load on the chest muscles throughout. Again, it is a good idea to start with a thinner band to decrease the resistance slightly and make it easier to perfect form. Start to increased the gauge of the band as you improve.