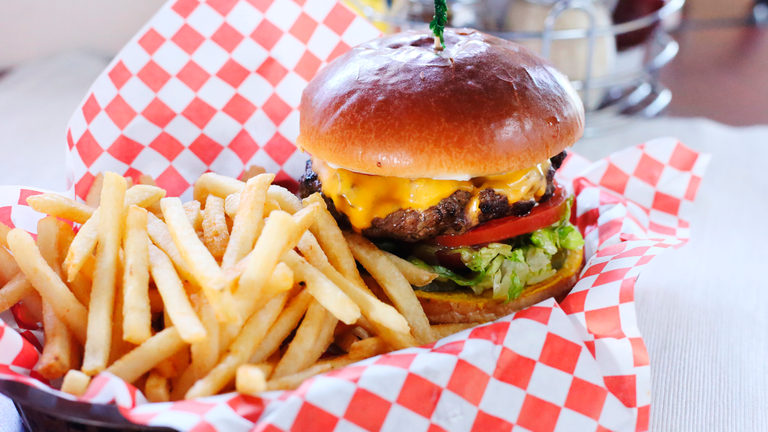 If you're partial to a takeaway from popular chains like TGI Fridays, Gourmet Burger Kitchen or Five Guys, this is going to be an uncomfortable read.

While we're obviously big advocates of healthy eating here at Fit&Well, there's nothing wrong with enjoying comfort food from time to time. However, if you're looking to lose weight, it's good to bear in mind how much exercise you're doing and balance your dietary choices accordingly.

This research is a good example of why you need to be mindful when it comes to healthy eating. Researchers from MyVitalMetrics, a London-based firm specialising in measuring athletes' metabolic rates, oxygen intake and other fitness metrics, have averaged out the nation's vital statistics and looked at how many minutes of exercise would be needed to burn off the UK's most popular takeaways, analysed according to Deliveroo statistics over the last year.

A standard cheeseburger from Five Guys contains an average of 980 calories. The average adult man would need to briskly walk for three hours to burn off that many calories. Alternatively, he would need to run for 77 minutes, cycle for 87 or clean the house for four and a half hours.

Of course, not all the calories from a burger will be stored as fat: everyone's body is different, and our metabolism burns some of them simply while resting. However, while you don't actually have to go on a three-hour hike, understanding the amount of calories we're eating in a single sitting is a sobering thought.

The average woman's body burns calories in a slightly different way to a man's, and MyVitalMetrics has calculated it would take the average woman around twenty minutes longer to burn off the full 980 calories.

However, the Five Guys cheeseburger isn't even the unhealthiest entry in the list: Wagamama's chicken katsu curry works out at 1,076 calories a portion, requiring men to walk for 200 minutes and women to walk for 234 minutes, on average, to burn it off. Even the curry pales to TGI Fridays' whiskey-glazed sesame chicken strips, an enormous 1,870 calorie appetizer. Appetizer.

On average, men would have to walk for 343 minutes or run for 145 minutes to burn off the equivalent amount of calories, while women would need to walk for 399 minutes – 6.65 hours – or run for nearly three hours. The full list of takeaway options, calorie counts and equivalent exercise can be found on the MyVitalMetrics website.

With 65.3 million orders placed via JustEat in the first quarter of 2020, it's clear we're in love with a good takeaway. We need to balance the foods we love with good nutrition, lots of exercise and healthy eating habits elsewhere in our lives, reducing our intake of unhealthy stuff.

For example, drinking lots of water before meals can stop us overeating. One study found middle-aged adults who drank a glass of water before mealtimes lost 44% more weight than those who didn't. Another great way of securing a balanced diet is by doing your best to get your five-a-day, which will help combat cardiovascular and cancer risks to help you live longer.