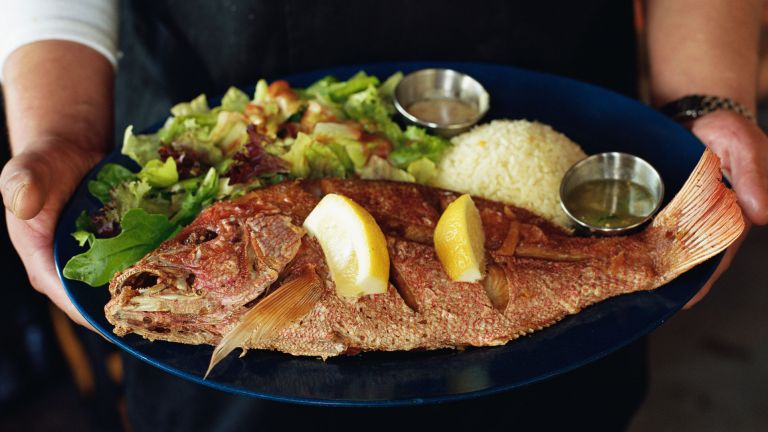 When looking at one of the healthiest diets in the world – the Mediterranean diet – it's full of colorful vegetables, healthy fats like olive oil, it's light on meat and crucially, it's full of oily fish.

Oily fish, defined as fish with oil in its tissue and guts, with their fillets said to contain around 30% oil. These fillets are packing two beneficial fatty acids, eicosapentaenoic acid (EPA) and docosahexaenoic acid (DHA). Fish of this type includes herring, mackerel, salmon, snapper, swordfish, trout and tuna, among others.

Oily fish is often referred to as "brain food" (more on this later), but there are a huge number of benefits attributed to eating fish regularly. Established "blue zones" in which people live long lives and remain healthy throughout, like the island of Okinawa near Japan, have diets rich in vegetables and fish, with little to no red meat.

Below, we're listing six of the most common benefits of eating oily fish, backed by scientific research.

Oily fish can improve your sleep

Struggling to dose off? Instead of counting sheep, count sea bass. A study published in the Journal of Clinical Sleep Medicine examined ninety-five male forensic patients from a secure forensic inpatient facility in the USA, half of which were put on a diet featuring Atlantic salmon three times a week.

The study found the fish consumption seemed to have a positive impact on sleep in general, and also on daily functioning. It improved sleep time, latency and the quality of the participant's sleeping, boosting mood during the day thanks to an increased vitamin D intake from the fish, and the effects of better bedrest.

Oily fish can reduce your risk of stroke

Oily fish benefits your general health by lowering your risk of suffering a stroke. A study from the British Medical Journal examined oily fish's effect on cerebrovascular disease, a general term for diseases which affect the blood vessels and blood supplies to the brain and accounts of around 85% of strokes.

The omega 3 content of oily fish was found to act as a preventative, lowering the participant's risk of getting strokes. It's one of the many benefits of those long chain fatty acids.

This is a nice easy one. Oily fish is packed with high-quality protein without any of red meat's purported carcinogenic potential. This makes tinned salmon and tuna perfect for people hard at work doing bicep curls and pull-ups while looking for a way to add a cheap source of protein to their diets.

Those long chain omega 3s are also great for people who are into weight lifting because they reportedly reduce delayed onset muscle soreness (or DOMS), helping you feel less sore after a workout.

Clinically-diagnosed depression isn't just going to go away because you eat a portion of snapper. However, the omega-3 in oily fish does show promise when it comes to tackling mild-to-moderate mood disorders.

A report from Harvard University illustrates how omega 3s are promising natural remedies for mood disorders. It's said omega 3s are "generally effective" as an add-on (not a replacement) for real therapy because they travel through the brain cell membrane and interact with mood-related molecules inside the brain.

In addition, the fatty acid's anti-inflammatory properties helps relieve the symptoms of depression and increase your energy day-to-day.

Those DHA and EPA fatty acids also have great benefits for your eyes. Macular degeneration is a disease which affects lots of us in our old age, as our eyes slowly fade. A study of 235 female health professionals found fish could help.

The study, published in the journal JAMA Ophthalmology, found "female health professionals without a diagnosis of AMD [macular degeneration] at baseline indicate that regular consumption of DHA and EPA and fish was associated with a significantly decreased risk of incident AMD."

Those fatty acids protect your eyes, reducing the risk of developing age-related macular degeneration. Carrots might be the most famous eye-improvers, but you shouldn't count out oily fish.

Oily fish is great during pregnancy

Finally, oily fish won't just benefit you – it could also help your little ones that haven't arrived yet. To encourage health for both mother and baby, the Journal of Perinatal Medicine reports "the consumption of oils rich in n-3 LC-PUFA during pregnancy reduces the risk for early premature birth."

Those polyunsaturated fats are full of health benefits for the mother, but the journal looked at research from the World Association of Perinatal Medicine, the Early Nutrition Academy, and the Child Health Foundation and found those benefits are also passed onto the baby. These benefits last beyond birth and are passed on via breastfeeding.

The journal found pregnant and lactating women should aim to achieve an average daily intake of at least 200 mg DHA.