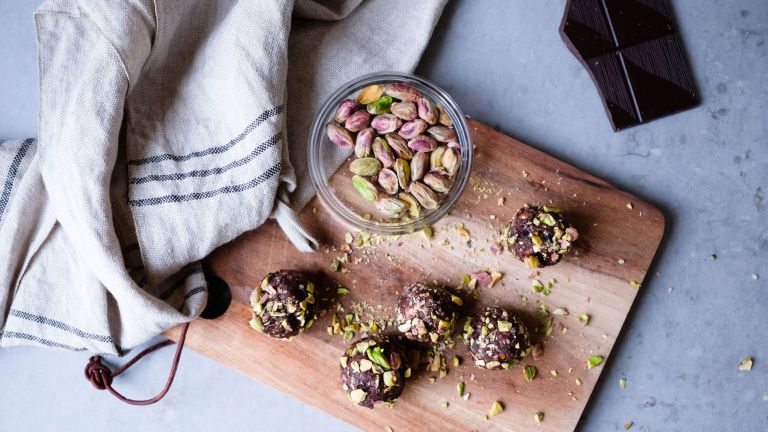 To many people, the idea you can eat foods which help you to lose weight still seems like a bit of an oxymoron. Especially nuts, which are usually associated with too much salt and fat, causing you to gain weight. But a few easy diet swaps can actually make all the difference and help you along your weight loss journey.

Take pistachios, for example. Most savoury snacks such as potato chips have next to no nutritional value, but swapping them out for a handful of pistachios can confer a whole host of science-backed benefits. Whether you're sprinkling them onto your salads, whipping them into pesto or even eating a handful at the bar, here's why pistachios are great for your weight loss goals.

The first scientific study we'll be looking at was published in the Journal of the American College of Nutrition. The study follows two groups of participants on a weight loss diet, with two key differences: one group consumes 53g of pistachios every afternoon, while the other consumed 53g of pretzels.

After 12 weeks, the results spoke for themselves. The pistachio group has a much lower body mass index, or BMI, than the group which had eaten pretzels every day.

The pistachio group also had much lower levels of triglycerides, a type of fat found in your blood which helps store excess calories as fat cells. Pistachios were found to significantly reduce the conversion of calories to fat storage.

Another study, published in the scientific journal Nutrition, looked at pistachio's effects on the metabolism, body composition and cancer risks in Asian Indian subjects with "metabolic syndrome", a cluster of conditions that act as a precursor to heart disease.

Over 24 weeks, the study closely monitored the subjects. At the end of the trial period, the pistachio-eating group were found to have a reduced risk
of cardiometabolic conditions, with lower waist circumference, body weight and body fat levels. This created a beneficial effect by reducing the subjects' risk of heart attacks.

One final study published in the Review of Diabetic Studies looked at pistachio's effects on the subject's existing type 2 diabetes. The study looked at 48 diabetic subjects, half of which ate 25g of nuts twice a day for 12 weeks.

The study found the pistachio-eaters showed decreased blood pressure after 12 weeks. In addition, their blood showed less glucose content, which meant the nuts were helping with the proper digestion of sugars and starches, stopping them from being turned into fat.

Now, it's well known nuts are high in fat, and in previous years, high-fat foods have been avoided as part of a healthy diet. However, we now know it's glucose, not dietary fat, that contributes most to your waistline.

A handful of pistachios are full of unsaturated fatty acids and potassium, which have antioxidant and anti-inflammatory traits. This could account for their beneficial effect on our bodies. providing they're not covered in sugar or salt, it's actually good for you to go a bit nuts once in a while.